Hi there! Today I’m sharing Days 16 thru 20 of my December Daily mini album. Not going to lie, I’m pretty much over Christmas at this point… anybody else? Yes? No? Just me? I’m ready to wrap this up because I’m pretty eager to start on my 2017 Project Life album. I’m loving all the new stuff coming out and I can’t wait to start sharing my new projects!

Let’s get started with day 16. I used an Ali Edwards paper as the background for my left page from her December Daily Main Kit. I wrote down my favorite Christmas movies on a white tag and added a wooden ornament from the Color Cast Designs 2016 Christmas Ornaments set.

Here’s a close up of my bad handwriting favorite Christmas movies and a picture of the Elf ornament AJ picked out for us this year.

December 17, the day we actually went out and did something festive and I got to wear something Beyonce inspired, all in one day!

Day 18 was back to normal, we didn’t have much going on that day so I took a quick picture of the gift wrap I used and I added this fun paper I found on Push Print Studios.

Double paged photos became my favorite for this album. I got a close up of some poinsettias on the 19th. I love the look of these flowers so I was happy I was able to incorporate them in my album (yet my husband doesn’t let me incorporate them in our home because he says I’m a plant killer…)

These last couple of years, I’ve asked my family and friends to gift us with ornaments from their travels. So for day 20, I took a picture of an ornament my sister bought us from Disney World this year.

The green and white snowflakes are from the Stampin Up December Wonder Stamps set. This digital set turned out to be perfect for my mini album!

So now I only have one more blog post to go for the last pages of my album! I’m still planning on doing a flip through video of the whole album once I’m done but I need to so some research on how to do this. I love editing photos so let’s see if I can edit a video!

I hope you guys enjoyed these new pages, see you next time!

Happy New Year’s Eve!!! I hope everybody had a wonderful Christmas and is enjoying the end of 2016! We actually had our Christmas on the 26th and we had a great time, even with a dead tree with no lights and even though my husband and I exchanged gifts days before.

Today I’m sharing days 11 thru 15 of my December Daily mini album today. For day 11, I took a close up picture of some flannel shirts I had just bought and I printed the “bring on the cheer.” card from Push Print Studios.

For day 12, I used a picture of our new Texas ornament to symbolize my day of jury duty… Yes, fun times were had that Monday… Well maybe it wasn’t the most fun day but it was interesting. 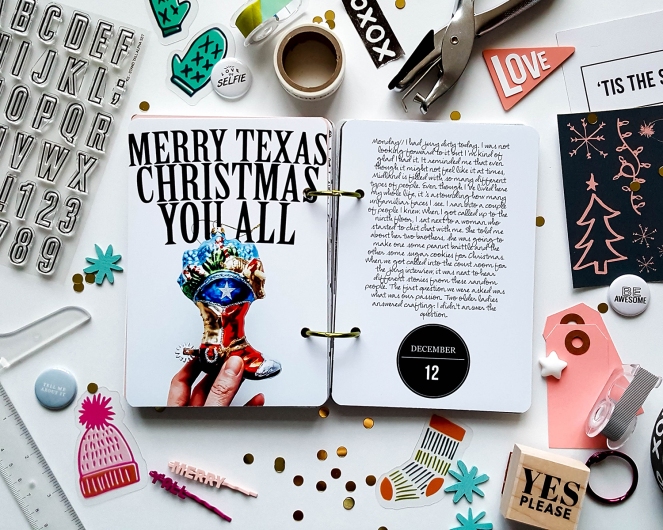 On the 13th, AJ had his first band concert. After he was done playing and the advanced band started performing, he sat down in front of me with my parents. I was able to take this quick shot of them with my phone.

So it turned out I didn’t take a picture for the 14th so I enlarged an other insert from Push Print Studio. I got the small pink tags from this month’s Messy Box.

Here is a close up of the “all the joy” insert. I just love all of Push Print Studio’s designs, it was really hard for me which ones to choose! 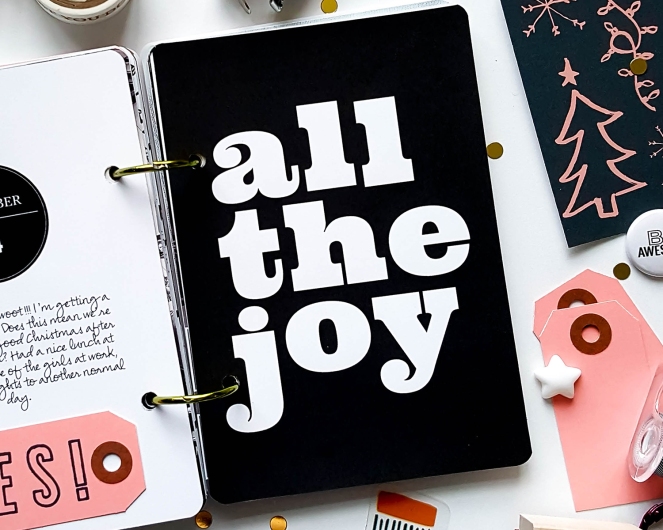 For day 15, I had the opposite problem. I took a picture but I forgot to jot down notes for the day. Thankfully, I took a couple of pictures of my girls and I used two and cropped them down to look similar. I used the Merry digital stamp from the Kellie Stamps Merry Joy digital stamp set.

This really came in handy since I didn’t have any journaling but it also adds different elements to the album. 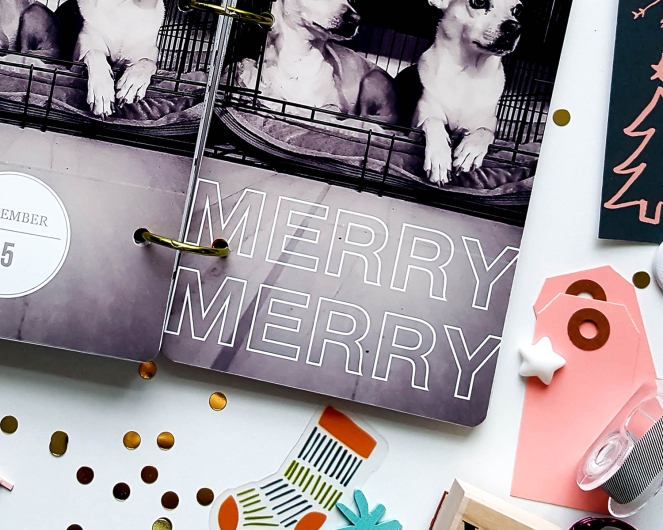 I’m almost done with my whole mini and I am so proud of myself for keeping up with it the way I have. I can’t wait to share the rest!

Two more days till Christmas! At this point, my husband and I pretty much already had our Christmas. We suck. I can never make it until the 25th to give him his gift, same thing happens for his birthday and our anniversary (I am so impatient). And when I give him a gift, he feels very guilty and tells me to buy/order whatever I want (my husband does not understand any part of “the element of surprise”. None. Zilch.) This doesn’t sound very festive but I have accepted the fact that this is us!

I’m excited to share the next five days of my December Daily! We pretty much haven’t done anything “festive” so it’s been a little hard to take pictures for my mini-album. That’s where my ornaments come in. I decided that as a new tradition, I’m going to go buy at least five new ornaments for our tree. You might remember from my last post, we don’t have that many ornaments/decorations yet. We have an awesome Christmas store here in Midland called Miss Cayce’s and I love to come here every year to get into the holiday spirit! This tortilla bowl ornament was bought there this year. Photographing the ornaments shows which ones we bought for the year plus it might help represent what happened that day. For instance, we had mexican food on the 6th, highlight of the day. What else do you need? Tortillas and cheese solve everything.

The red and green stars are from Ali Edwards December Daily Main Kit for 2016.

On day seven, I went to Barnes & Noble to buy a gift for a friend and ended up buying Love Warrior. I mean, Oprah recommended it so you know it’s gotta be good.

I used the Jingle All The Way digital paper from the same Ali Edwards kit and ended up typing my five favorite Christmas songs. I also added the Happy Holidays record from a past Messy Box.

It actually snowed on the eigth! I went outside of my office building and snapped a quick photo to use for both pages. I printed my journaling on vellum paper.

Here is what the spread looks like without the vellum. 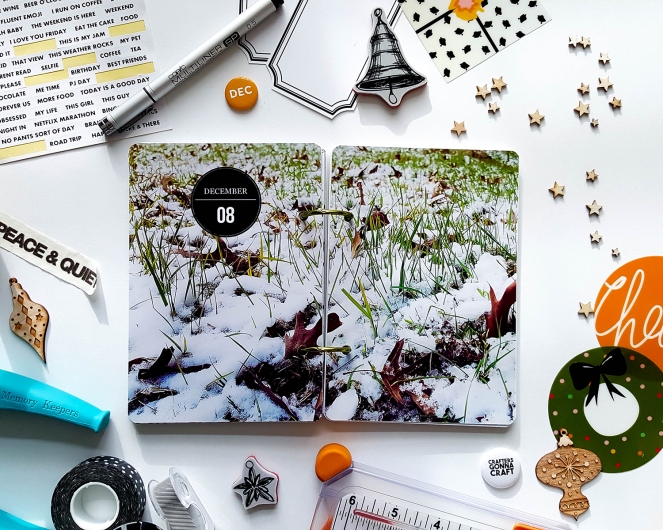 I looked up the lyrics to Blue Christmas and used them as a background with Photoshop.

For day ten, I had a picture that AJ and I took with Snapchat. I doodled on the white space with a Copic Multiliner pen, my fave to use on photo paper. I also added some washi tape and a sticker from the Kellie Stamps Fri-Yay Sticker Set. Fun fact: I am obsessed with big chunky socks. 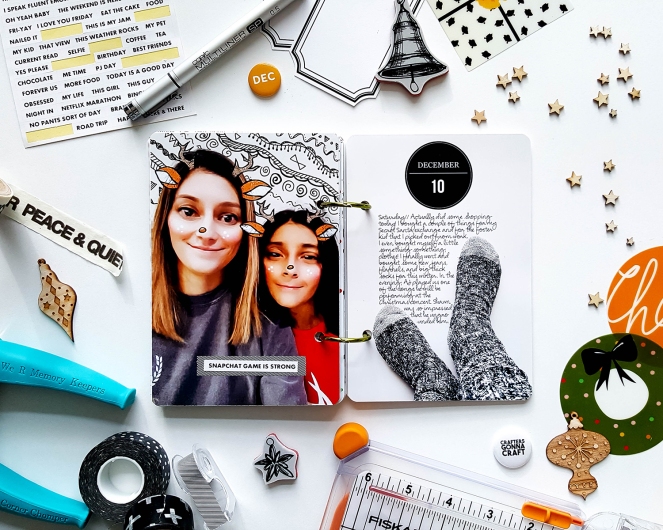 It’s crazy to think that December Daily 2016 is quickly coming to an end! I’m loving everything I see on Instagram and Facebook, there is so much inspiration out there! And if in case you were wondering, we’re about to wrap up season three of House of Cards, such a freaking good show!

See you next time!

Hey guys! Are you doing December Daily this month? Are you keeping up? Are you like me and decided last minute to join in? I mean, come on… have you seen what everybody is posting on Instagram and Facebook groups? Well, I totally got the FOMO around the end of November.

I was really hesitant to start my own DD album and I’ll tell you why. First, because I wanted to focus on my Project Life album and finish it on time so I could have a clean slate for 2017. Second, I also wanted to focus on finishing my 2016 mini album. Third, and this is kinda personal, I’ve only been celebrating Christmas for the last 8-9 years. I was raised not celebrating Christmas or any holiday so I have no childhood holiday memories other than I was unable to participate in holiday activities at school. Sounds a little sad, right? But, I never missed it because it was something I never experienced. Fast forward to 2008 when my husband and I started dating (and AJ had just turned 5), and we both decided to celebrate Christmas. My husband wasn’t too big on the holidays either, so the first couple of years I would say Christmas was a little awkward? We had no decorations and I knew absolutely nothing about Christmas traditions, let alone how to pick and decorate a Christmas tree, and I didn’t know any of the words to any Christmas songs. So because of this I had just decided that December Daily was out of the picture, just like I decided last year also.

But here I am, with my first five days of my December Daily album. I do have to say I’m kinda proud of myself for keeping up with this like I have been. Now keep in mind, I have not taken any of Ali Edward’s classes, which I think is a huge mistake. I wish I had taken it because I know I have been a little overwhelmed at times and I catch myself overthinking everything. The good thing though, is that I decided early enough to do a mini album. Because of this, I don’t feel the pressure of taking many photos. So far every day this month, before I go to bed, I’ll come into my craft room and journal about my day. Usually the next day I’ll decide what picture to use, edit it, and combine it with the journaling.

I ordered this awesome acrylic album cover from Color Cast Designs. I ordered it in all white but you can customize this with a phrase and by color. My cover page is very simple. I used a digital stamp from the Stampin Up December Wonder Stamps digital set.

For this layout, I went ahead and typed out my December “Hopes”. Let’s face it people, at this point my hope is to stay on track with my album for the rest of the month!

For day one, I took a cute picture of my dog, Zoie, chilling in her bed. Unfortunately, I did not realize the hole punch would go right on her face. Sorry Zoie!

I did some journaling on the picture itself and I added some of my favorite things for December on a Push Print Studio card. 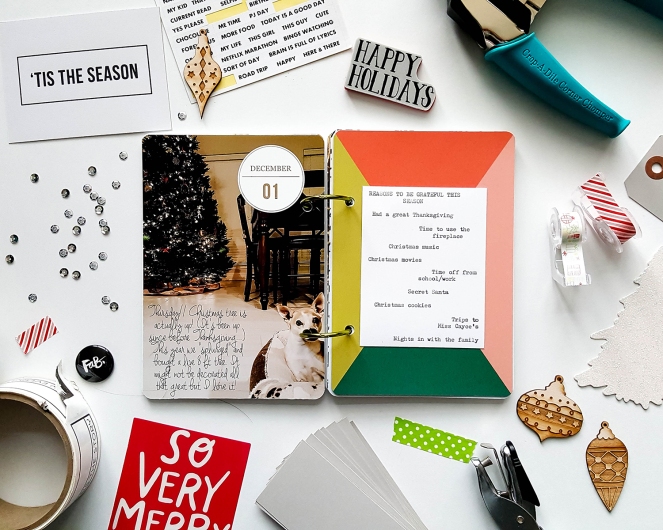 For day two, I decided to take a picture of one of our new ornaments because pizza is all I ate this day. I used Photoshop to add words behind my hand. 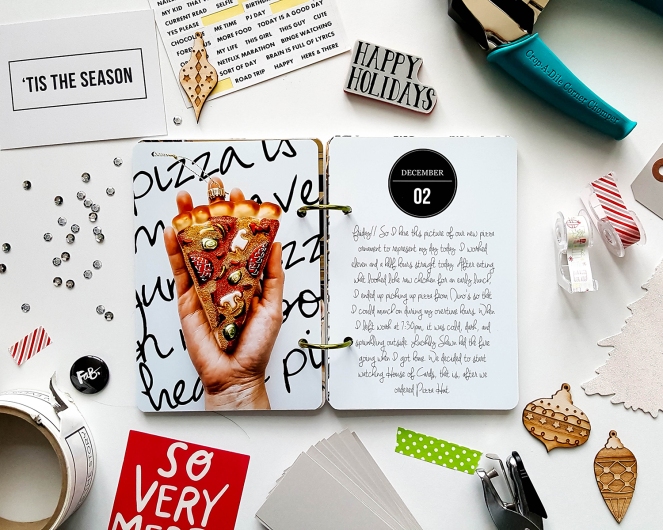 For day three, I used one of Ali Edwards digital papers from the December Daily Main Kit. This was my second year participating in a Christmas card exchange from a  Flickr group that I am a part of. You can see the three cards I received on the left page.

Day four is when I blogged about the Christmas cards I made this year. Again, I added words behind my hand with Photoshop0

And finally, day five, the day I journaled about receiving my new logo stamp and about our Christmas tree already dying…

Thanks for stopping by, see you guys next time!